Leaks in your ductwork cost money, stress your air conditioner and can even lead to allergy flares. The network of air passageways that runs through your home isn’t exactly an aesthetic feature, either. It’s hidden inside walls, crawlspaces, and attics. So unlike a plumbing leak that leaves a trail of water, a duct leak might go unnoticed for years.

But there are clues if you know where to look, and there’s a solution that’s simpler than you might think. If you live with one or more of these problems, it’s probably time for an inspection.

Temperatures are brutal this summer, both in Massachusetts and nationwide. But it’s always difficult to know if it’s the weather or a problem with your HVAC system that’s responsible for higher energy bills. Either one (or both) might be to blame.

Leaks in the ductwork allow part of your conditioned air to escape into places you’d never intentionally cool, such as the attic and between walls. The U.S. Department of Energy says that in many homes, the loss is about 30 percent. Leaks can also allow heat from those spaces to infiltrate the ducts and warm up the air that your AC system worked so hard to cool. Warm air naturally transfers to cooler spots when there’s nothing in place to stop it.

Most homes have spots that are harder to cool than others. Rooms on upper floors and those with large windows or inadequate insulation can all take on excess heat. And you might also have spots that are too cold. But when those problems can’t be traced to an obvious culprit, leaky ducts might be behind it.

With leaks, some of your cool air never makes it to its destination. That creates hot spots. Then if you lower the thermostat to compensate, other parts of your home might be too cold. If hot spots happen near your registers, you’ve probably got a leak.

#3: Your Air Filter Gets Dirty Faster

Most homeowners change the HVAC air filter every 1-3 months. It depends on factors such as whether or not you have pets and whether it’s pollen season. More particles in the air clog up the filter faster. However, leaks in the ductwork can dirty the filter more quickly.

Ducts run through unfinished parts of your home, and those areas are highly dust-prone. All that it takes is a small leak to allow dust inside, where it’s then sent out through the registers. From there, the system’s air intake draws in the particles and the filter traps them. If your home looks a bit dustier and your filter needs frequent changing, a duct leak might be behind it. 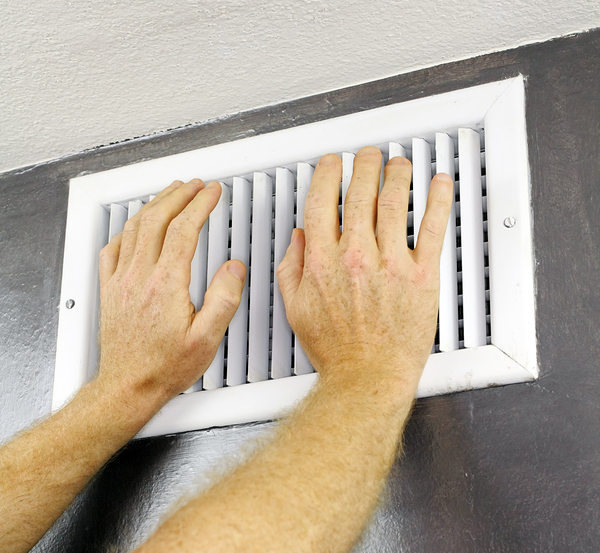 If you have to do this, there’s a problem.

#4: The Airflow is Noticeably Lower

Air should flow out through every register in your home at about the same rate. You might notice some differences, as registers closer to the system often have a bit more airflow than those at the end of the run. But it shouldn’t be dramatic.

Comparably low airflow through one or more registers is one of the simplest ways to suss out leaky ducts. Unfortunately, some homeowners live with the problem for years, believing that it’s a normal hazard of a forced-air system. That’s usually not the case.

Duct leaks are like little thieves that abscond with your family’s money and comfort. And for years, sealing up those leaks was a challenging, invasive and costly job. But there’s a newer technology called Aeroseal that’s effective, efficient and affordable.

Instead of fixing leaks from the outside using messy mastic and tape, Aeroseal works from the inside. The best part is that it finds and seals leaks in hard-to-reach areas and those that are so small that the human eye wouldn’t spot them. It’s a simple solution to a complicated problem.

Rodenhiser specializes in duct inspection and sealing. For over 85 years, we’ve provided excellent service to homeowners in Framingham, Concord and throughout the route 495 / 128 area. Call Rodenhiser today, and we’ll seal your leaky system for good.

Do You Need to Replace Your Central A/C?

Here are seven reasons you might want to replace your central A/C:

If you want to talk with an HVAC expert about central air conditioning systems in Salt Lake City, call us here at Rodenhiser Plumbing, Heating & Air Conditioning.

Some Essential Benefits of Ductless A/C

Let’s look at some benefits you get from going ductless:

If you need an efficient, affordable way to cool your space, consider the benefits of ductless air conditioning. For more information on a ductless system, contact us here at Rodenhiser Plumbing, Heating & Air Conditioning.

Winter is gone. The warmer winds of spring have arrived. It is the perfect time to get some spring cleaning done. If you are getting your spring to-do list together, don’t forget to spring clean your HVAC system.

Use this simple checklist to get your HVAC systems ready:

Spring cleaning your HVAC system will only take a short amount of time. However, it is time well spent in making sure it will work as the warmth of summer arrives.

If you need an HVAC professional to check your HVAC system, contact us here at Rodenhiser Plumbing, Heating & Air Conditioning. We proudly serve our neighbors in the Route 495/128 area of Massachusetts.

Is your home protected from the elements? Whether you’re trying to keep the cold out during winter or keep cool air in during summer, use these tips to weatherproof your home for enhanced comfort and efficiency.

END_OF_DOCUMENT_TOKEN_TO_BE_REPLACED

While it may not be immediately obvious, the condition of your ductwork can greatly affect indoor air quality. Your home’s ducts can be contaminated by dust, mold and other particulates. When this happens, it’s possible to have them cleaned, but preventing dirty ductwork in the first place is an even better idea.

END_OF_DOCUMENT_TOKEN_TO_BE_REPLACED

Are unusual sounds emanating from the duct work hidden behind your home’s air registers? Some duct noises aren’t a cause for concern, while others can point to HVAC system issues that impact comfort, indoor air quality and energy efficiency. Here’s how to tell what some of the most common ductwork noises mean:

When the blower cycles on and pushes air through the ducts, the increase in pressure against the metal can cause a popping noise. This type of sound is completely normal. It’s often more noticeable when ducting is new or just cleaned, since accumulating dust has a muffling effect.

If the ductwork is leaky, escaping air can produce a whistling sound when the blower is running. Having the ducting properly sealed and insulated can stop the noise, and prevent unnecessary energy losses that rob you of up to 30 percent of the equipment’s heating or cooling output.

Loose or disconnected duct sections can bang or rattle when the heating and cooling equipment is operating. Checking all the joints, correcting any poor connections and then sealing the ducts using mastic or metal-backed tape can solve the noise issue and help avert future problems.

Metal ducts expand in response to temperature changes. If enough space wasn’t allowed around the ducts during installation, you may hear a scraping noise when the expanding metal rubs against floor joists or other building components.

While it’s normal to hear a low roar or whoosh through the ducts when the air handler is running, a sudden increase in noise volume warns you that airflow has become restricted. If replacing the system’s air filter doesn’t help, contact an HVAC professional to identify the cause before airflow loss issues lead to equipment damage.

If you’re hearing scuttling sounds, rodents may have taken up residence in the ducts. Contact an exterminator to get rid of the infestation, then schedule duct cleaning to remove any contaminants.

For expert advice about the cause of duct noises in your home in the Route 495/128 area of Massachusetts, contact Rodenhiser Plumbing, Heating & Air Conditioning.

Central HVAC units are specially constructed to provide an entire building with heated or cooled air. Why, then, do so many buildings end up with uncomfortable hot or cold spots? In many cases, it boils down to unbalanced airflow in the building. END_OF_DOCUMENT_TOKEN_TO_BE_REPLACED

Have you taken a look at your home’s ductwork lately? If you’re having problems with this easily neglected aspect of the HVAC system, chances are it may be time for a cleaning or, in some severe cases, it may need to be replaced. Knowing when it’s time to clean or replace ductwork is crucial for maintaining healthy indoor air and excellent HVAC comfort. END_OF_DOCUMENT_TOKEN_TO_BE_REPLACED

Although seasonal maintenance on your air conditioning or other cooling systems is important, some guidelines remain the same whether it’s chilly winter, humid summer, or mild spring and autumn. In particular, maintaining your home’s ductwork is essential to keeping your home comfortable. At the same time, duct sealing will also raise energy efficiency and lower utility bills. END_OF_DOCUMENT_TOKEN_TO_BE_REPLACED